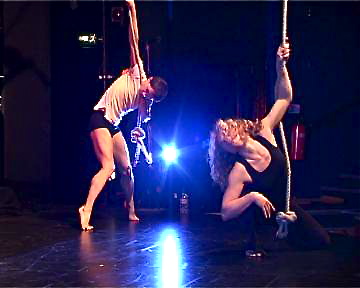 While Alison was touring with “Spirit of the Dance” around America, she kept a journal. One day, somewhere between Arizona and Texas, she realised that an idea for a show had started to evolve. She had been inspired both by the enthusiasm of the audiences in the U.S. A. and also by their lack of understanding of who ‘The Celts’ really were. Being raised in Scotland, Alison started researching Scottish legends,  fascinated by the influences that the Celts would have picked up during their travels. Before she knew it, a major show was in the making-but little did she know how long the preparation would take! 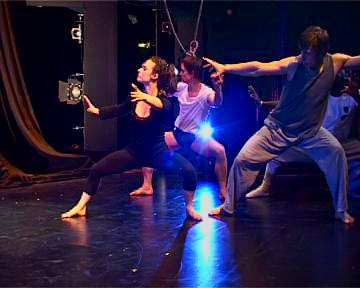 Once off tour, Alison spent the summer in Skye and Edinburgh, interviewing people and researching the legends. She had been introduced to one particular story about the Amazonian – style warrior queen Scathach, who allegedly came from Skye. Having exhausted all possibilities working on the script, Alison then decided that Granada in Andalucia, was the perfect base to compose the music, due to all the travels and exchanges The Celts made with different cultures-there were many influences to discover. She spent two years there writing the music for “WILDFIRE!”

In 2007, Alison founded her company Shapeshifter Productions Ltd, to provide an official home for new creative work which combines high quality art forms and artists to reach new audiences through telling ancient and modern stories in challenging and innovative ways, exploring indoor and outdoor performance through music, movement, dance, circus, martial arts and voice. Their first project is an outdoor large-scale combined arts project called WILDFIRE! In 2007, Shapeshifter Productions ran its first Research and Development phase which was funded by Arts Council England, London, to develop the work. In 2008, they received a second round of development funding for “WILDFIRE!” and the New Wolsey Theatre, Ipswich,  offered a small bursary and theatre space for one week’s rehearsal, which culminated in a short presentation to an audience of 100 at their PULSE festival. A special edition of WILDFIRE! was then commissioned by Homecoming Scotland and the Scottish Arts Council, when over 1500 people were led by a torchlit procession to a mystery venue to see the magical spectacle premier at the finale event of Homecoming Scotland 2009.